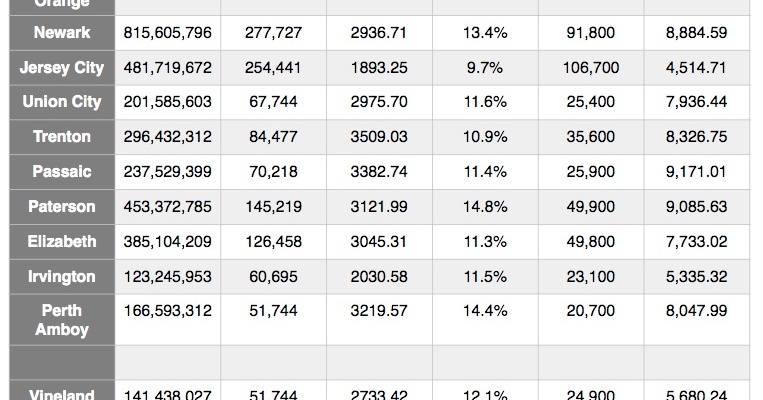 Surprisingly, I have yet to include aid summaries for the cities I have been studying. At last, this information will be provided along with what I believe to be a new image of hope for New Jersey’s most aid-reliant cities. The only thing I’ve done is divide the total aid amounts by the reported number of working citizens in 2013 to yield a dollar amount. I interpret this amount to be the amount of money that cities fail to be able to collect from their citizens due to low income limitations. I have included 12 of the previously discussed municipalities along with Cherry Hill and Pennsauken to act as perspective reference points.

The column to the far right titled “Aid Amount per worker” shows how much additional money is needed in a municipality per worker in order for the city to function and be fiscally sound. In theory, a government would want the number in this column to be as close to zero as possible, meaning that not much aid was even required because of the municipality’s ability to generate this revenue through taxation. For example, the very affluent municipality of Cherry Hill has a per worker remainder of only $888.51, the closest to zero on this table, and most of the reasoning behind this number even existing is because of formulaic state aid that still applies a calculated sum to the township. So, why does this create fiscal hope for New Jersey’s most aid-reliant cities?

We are able to see hope in all of these cities’ fiscal futures because it can be safely assumed that the overwhelming majority of workers work for low wages, or minimum wage, in these cities. Since 2010, New Jersey’s minimum wage was held at $7.25 an hour, so for workers, that meant a rough year of making just $15,080 before accounting for taxes. This year, the referendum passed the minimum wage to increase to $8.25, so workers will bring home about $17,160 a year working full time. The interesting part about the referendum vote was that the minimum wage will be required to increase annually according to the cost of living, which MIT believes to currently be $11.13 for a single adult in New Jersey. This brings a full time worker up to $23,150 which is $8,070.40 more than what full time workers were making last year. Now, looking back to the last column of my chart, we see that 7 municipalities have “per worker aid remainders” within $8,070.40, and 4 others very close to the mark.

What this means is that by January 2016, New Jersey’s most aid reliant municipalities may be able to cut their functioning aid requirements (what they receive from the State) in half through higher tax revenues, which could free up almost $1.5 Billion in the State’s budget based upon these municipalities alone. With a brand new sum of $1.5 Billion suddenly available, New Jersey may be able to do many things, such as pave roads, build 21st Century School building, or pay into it’s pension fund.

In this study, Camden is an extreme outlier with a per worker aid remainder of $17,026.69. This is largely due to the fact that Camden’s unemployment rate is the highest amongst these cities, and it also has a very high population of young people who are not of age to work. Overall, looking at New Jersey’s new minimum wage policy along with who it will directly impact leaves me signing off with a ton of optimism for the State’s financial future.

2 thoughts on “The Referendum’s Effect”